Matter, a startup with its roots in Boston but now based in Dumbo, Brooklyn, is trying to make manufacturing easy and accessible for independent designers and small businesses. With $1 million in seed funding, Matter is helping indie artists grow and scale.

Dylan Reid, Co-founder and CEO at Matter, told us about how they believe a good factory should have nothing to hide and how data helps them build and maintain better ways to deliver small-scale manufacturing while preserving the art.

Matter, like many other businesses, was created out of frustration. Frustration with a problem that wasn’t being solved. In this case, small-scale manufacturing. Both co-founders come from manufacturing backgrounds at big companies like Apple and Johnson & Johnson – the type of businesses that face no manufacturing issues because of size and volume. If you’re a small business, on the other hand, manufacturing is really hard. Upfront tooling is expensive and scaling is difficult as minimum orders are very high. Dylan and Greg wanted to fix this.

Arguably, manufacturing is the one bit of the economy that hasn’t come online in a meaningful way. This is what Dylan and his partner wanted to change as they set out to re-imagine what manufacturing could look like for small businesses and independent artists.

They wanted to create a factory for the smallest customers that would require very small upfront costs and no minimum orders. One of the reasons they were able to do this is through 3D printing. By using 3D printing, the team at Matter were able to take the most expensive part of manufacturing, the molds and dies, and bring the cost down from about $10,000 to about $20.

Dylan explains, ‘We wanted to bring these small designers and small practices into the 21st century in a way that's really on their own terms. We're firm believers of preserving the art. We always need to think about how technology can aid the creative process and not replace craftsmanship.’

Dylan compares the process of manufacturing and controlling the supply chain to a Jenga tower: Everything is closely interconnected and moving one thing means you’re moving everything else. In manufacturing, however, this process can happen over a couple of weeks, meaning it’s difficult to identify the bottlenecks in the chain and anticipate lagging indicators.

Understanding what’s going on in each step of the process is absolutely crucial. Dylan points out, ‘It’s critical to be able to know what needs to be fixed and you can only do that if all the data is in front of you all the time.’ Dylan continues, ‘The way that almost all manufacturing goes, usually, you only find out there's a problem when it presents itself. Data helps us identify these lagging indicators so we can respond to them before they become a problem.’ Because of this, Matter was built in such a way that everything in their production line can be tracked. It was incredibly important to understand every part of the process, and the only way to do that was to visualise it.

“Traditionally, you never find out about these things until it's way too late. Having visibility on every part of the process allows us to manage it more effectively. Simply by looking at the numbers, we can tell you there’s a problem before there’s even a problem. That's real power.”

The production team at Matter relies on this data, in fact, it’s their only view into what’s going on. Everything from QR tags to performance stats are being visualised on the dashboards that have been placed on two big screens in the office. ‘Personally, I look at the dashboards about 150 times a day’, Dylan adds.

While examining the situation, Dylan discovered that the reason why manufacturing didn’t work at a small scale, was because of data, or rather, the lack thereof. Dylan explains, ‘Data plays a really important role so you can get an aggregate view of the entire process.’ At Matter, they’re dealing with physical machines, not software. This instantly makes things more complicated as there are no integrations, plugins or widgets ready to ‘switch on’. As a result, Matter had to build their own tracking, using custom widgets to visualise the right data. While this might seem to be a daunting task to some, they knew it would help them build a more reliable process and a stronger business for the long term.

In the manufacturing industry specifically, not measuring, or measuring the wrong things, will cause irreparable damage to customers, to merchandise – to everything. That’s why getting the design of the dashboard right was vital to the team at Matter. Like Dylan stated, ‘The numbers don't lie if you build it right. That’s why you have to spend some time thinking about the design of your dashboard, because if you're measuring the wrong stuff it could have adverse effect.’

Dylan and his team designed mockups of the dashboard in Photoshop before they implemented it. As a way to figure out which were the right numbers to look at, they printed off the designs and stuck them on the wall for a couple of days to see what was important and what wasn’t, judging by people’s reactions to the numbers. Despite these being mockups and the numbers weren’t being updated in real-time, they could still get a sense of what needed to be displayed.

Below is one of the first mockups Matter put together.
Click to enlarge. Image will open in new tab. 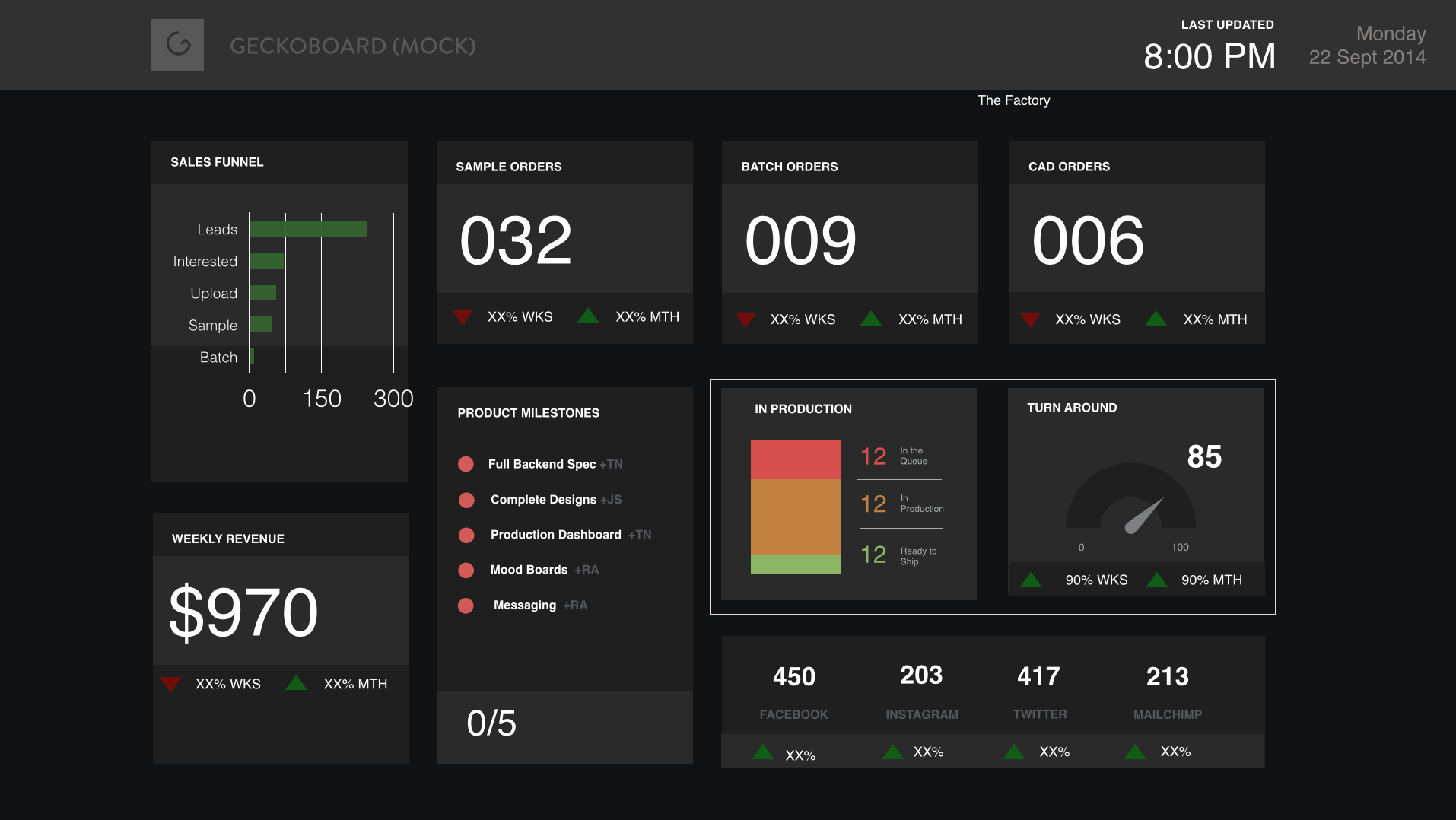 At Matter, they believe most of the problems in manufacturing are a result of not having a high-level view of data in real-time or being able to break that data down and look at it in a really granular way. Dylan confidently states, ‘We knew running this company based on numbers and having access to data was gonna be key to this whole concept. For us, data is not an afterthought. Using data to identify problems is key to running the business.’

Needless to say, manufacturing is a process-sensitive business – if someone slips up and forgets to measure something, that Jenga tower will collapse. That collapse will cause damage to every single part of the process, ultimately hurting not only the production side of things but also the most important stakeholder – the customer.

Matter: A manufacturing company with an eye for both data and design