At Geckoboard, we’re on a mission to help people use data more simply and effectively. We’ve put together a series of quick lessons to help you spot fallacies in data or call out dodgy visualizations so you can use data with confidence and make better decisions both in work and in life. 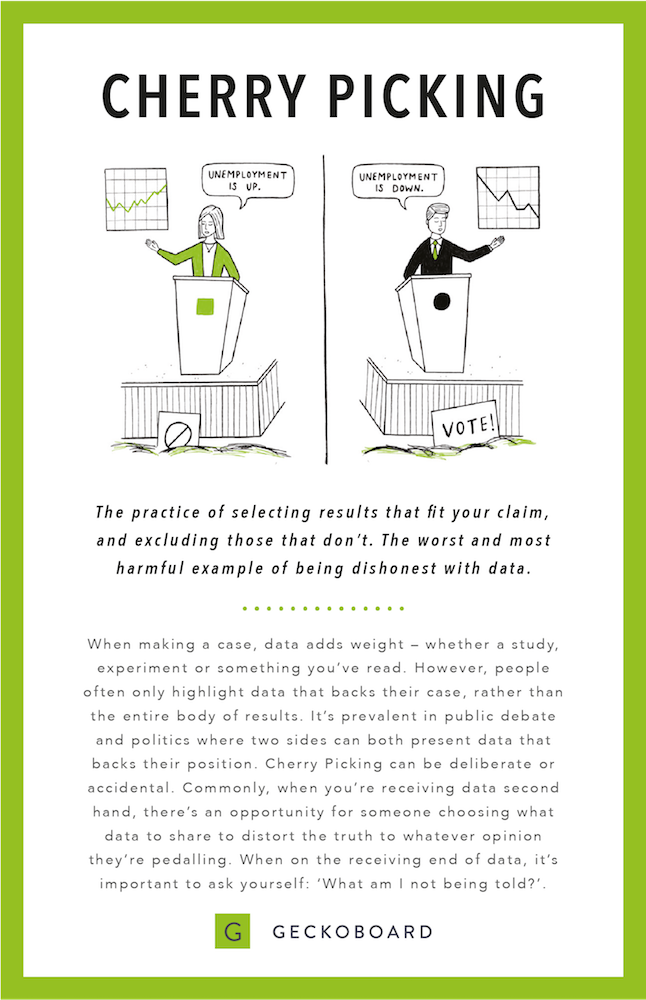 
Cherry picking is when you selectively pick out the evidence that backs up your point of view while disregarding the data that doesn’t. As you can see in the image above, two politicians have looked at unemployment figures and eliminated any data that disproves the argument they want to make, leading to rather different conclusions.

Cherry picking can be deliberate or accidental. People who do it are not lying but simply omitting facts. Cherry picking is so dangerous because when making decisions, we’re often dependent on information from people who are experts. That’s why blindly believing that something is true based on one expert’s opinion is ill advised. It’s best to first go back to the source or ask for the opinion of another expert.

What Cherry Picking could look like in your business

Cherry picking is often seen in what’s called confirmation bias. Although it’s most common in politics and press, it can certainly happen in business too. When wanting to prove a point, we sometimes are more amenable to research that backs that point, omitting any research or data that disproves our point.

For example, your project manager is giving you weekly status updates on conversion rate, number of customers using feature X, customer satisfaction, and so on. But each week, (s)he cherry picks the data that’s looking particularly good that period, in order to make it seem like everything is going very well. This may seem malicious but could easily happen in a company where there is a bad culture or where what's best for the business doesn’t align with what’s best for the individual.

How to avoid Cherry Picking in your business

As a business leader, you're expected to make decisions based on data you receive second hand all the time. As in the example above, there’s an opportunity for the people who are choosing the data to distort the truth. It’s critical that you ask: ‘What data am I not seeing?’ and to do your own research before making a decision.

For those in your team who are on the data distributing end, it’s critical to paint a complete and fair picture by offering consistent reports on important numbers but also sharing more of the underlying data for context and transparency.