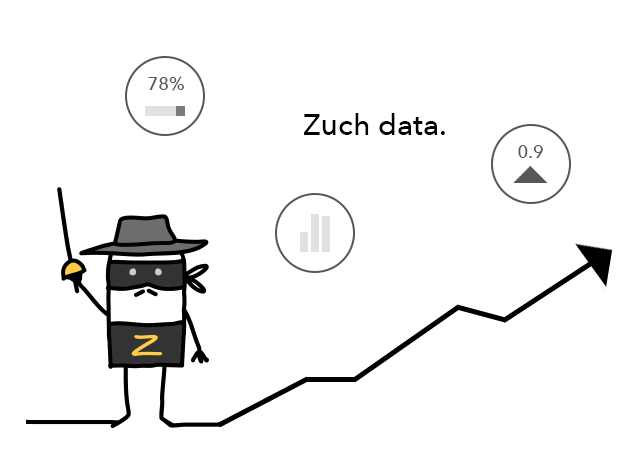 Zorro (yes, the masked man who lives in a cave and swings his sword like no other), did not automatically become the hero he’s known as today. As a young man his ambition far exceeded his knowledge and skillset, but without the right tools to achieve the desired goal, Zorro quickly surrendered to alcohol and despair. Luckily, Zorro met Don Diego - a retired sword master who recognised Zorro’s potential. Don Diego taught him about focus, perseverance, and strength until Zorro one day was ready to take on the villains he had always wanted to conquer. So how did Zorro go from being a depressed drunk to a praised hero? Baby steps.


The concept of Zorro Circles

The concept of Zorro Circles is a metaphor for how we can follow our ambitions and achieve our goals by tackling the challenges we face one by one. Gradually, as we become ready, we can complete what we set out to do.


When Zorro first started out he had no focus and no control. He wanted to do too much, too quickly. His training began with the drawing of a single circle in the sand. Don Diego told Zorro that his entire world now existed within this circle, and he had to master what was inside of it before he could move on to the next circle. Through time and dedication, Zorro mastered circle by circle. As he learned how to command his emotions and began to understand and utilise his skills, he eventually had the ability to accomplish his goal. (His goal in this case being to take on the army. No big deal.)


The importance of being in control

The feeling of being in control is imperative to our behaviour, so when our work and life balance falters our sense of control rapidly declines. We have a natural need of being in control, which explains why we sometimes have strong reactions to change - we feel like we’re losing control. However, psychologists have found that levels of productivity, happiness, and health are affected by the perception of how much control we have, as opposed to how much control we actually have.


Inherently, as humans, we use our emotional side of the brain (after all, it’s what helped us evolve: “danger, run!”), but as society developed, the cognitive part of the brain became more dominant: think first, then react. It’s the civil thing to do, right? But despite logic and “knowing better” - once we’re starting to feel stressed or overwhelmed, our emotional side of the brain takes over. This, referred to as “emotional hijacking” by Shawn Achor, the author of The Happiness Advantage, can have huge negative effects on our professional life. This is where Zorro Circles come in. Zorro Circles give us just enough control in a situation that appears overwhelming, and once that first sense of control has been established we can gain more and more.


Conquer your data and motivate your team - the Gecko Effect

In biology, the Gecko Effect is known as “the ability to cling to different smooth and rough surfaces and detach at will” - in other words: adaptability. In this case, the Gecko Effect refers to the sense of control that is perceived when your data, and in essence, your success, has a constant visual presence in the work place. By seeing the impact you have and the results that come from it, you can adapt your practices according to what your data tells you. Let’s take a look at SaaS business Podio to see how Geckoboard changed the way they work with data.


Podio, an online work platform for collaboration and project management, realised that they didn’t have an understanding of how they were doing as a business. With one team in Copenhagen and one team in San Francisco, it became clear to Adrian Young-San Roessler, Product Manager at Podio, that they weren’t fully aware of the impact of the work they were doing. This had to change.


As they introduced Geckoboard to the work environment, they identified the metrics that mattered to them, and one central dashboard was set up in the office. The link was then distributed to remote team members so they could access the same data. Almost immediately you could see the effect in terms of the awareness it generated, and a few months later >Podio started to set up more boards to focus on more specific areas.


Today, among other boards, Podio has something they call the ‘beat-the-numbers’ board, where they look at some very important, first-time user metrics. “Those numbers really help the product team to stay informed using the right data and it also allows us to see the impact of our work,” says Adrian. Podio also put the loop feature to good use, having different sets of data rotating on the board. 'People passing by stop in front of the board to discuss what’s going on, which is really great,' Adrian continues.


Who are your villains?

So, much like Zorro and his circles, Podio started off with one board focusing on the very core metrics of their business, and when they were ready they added more. Employees were constantly in the know of what’s going on and could clearly see the impact they were having on the business. This resulted in a sense of control and also spurred motivation among team members.


So who are your villains? What do you want to conquer? Go on, draw your first circle and focus on what matters.