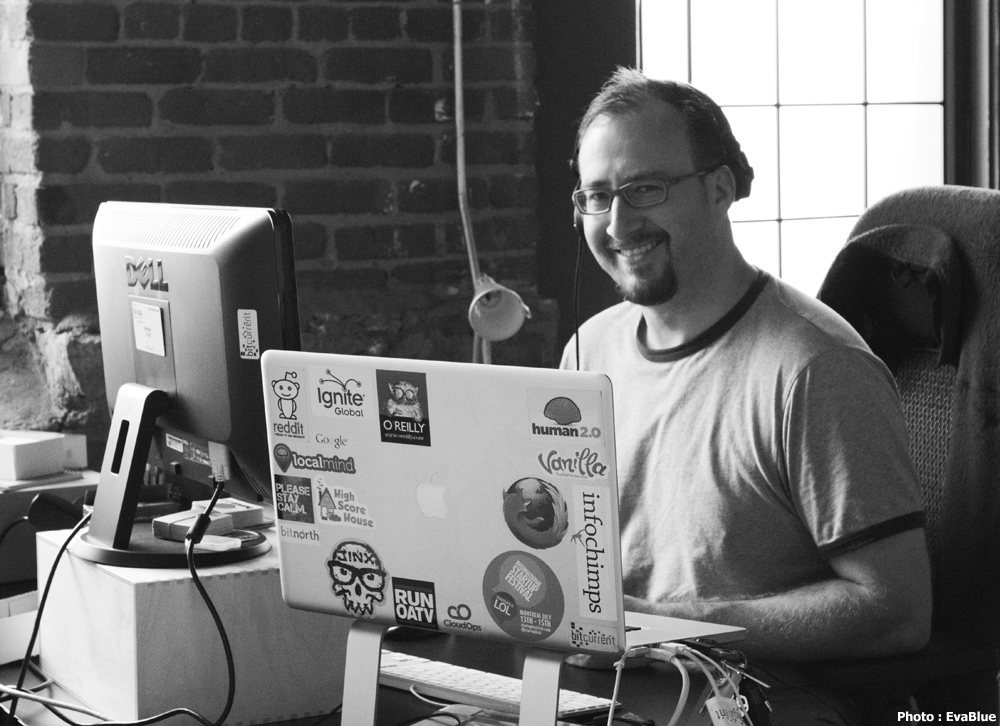 In the year since Lean Analytics was released, I’ve spoken with all kinds of companies, from fledgling founders to global giants. The early-stage firms have few constraints, and they’re free to experiment. But it’s the big companies, hamstrung by convention, who have the most perplexing questions.

Any modern author can see what parts of their book is resonating with readers, looking at e-book data to find the phrases that were highlighted by their audience. In our case, one of the most popular is, “being an intrapreneur is like tilting at windmills,” a reference to the mad Don Quixote and his futile fight against machinery.

Many people trying to change things from within have an almost Sisyphean task ahead of them. If, as Steve Blank says, a startup is an organization designed to search for a sustainable, repeatable business model, then it follows that a company is an organization designed to perpetuate one. But the assumption that tomorrow is like today, only more so, stifles innovation and kills companies.

Over the past few months, I’ve been interviewing product managers, innovation officers, and technologists at some of the world’s largest companies, trying to understand how they balance the sustaining innovation that keeps the cash flowing and the lights on with the disruptive innovation that opens up new opportunities.

So far, four big strategies stand out. They keep score differently, they frame product creation as a study, they innovate on product, market, and method, and they manage a three-tiered portfolio.

Here’s a bit more detail on these.

One of the biggest challenges Intrapreneurs face is that of competing metrics. Large businesses have annual budgets, and tie compensation and bonuses to the attainment of known goals rather than to the discovery of new ones.

Companies that manage to innovate recognize that tomorrow’s businesses look bad when seen through today’s lenses.[i] Consider Blockbuster and Netflix. Blockbuster made much of its revenue from late fees; Netflix had none, so it looked less attractive to the incumbent.

To deal with this, companies create new metrics (such as the number of assumptions confirmed or repudiated) and different timeframes (such as weekly or monthly budgeting.) Data on innovation projects is reported in aggregate on an annual basis to the host company, but the individual projects are shielded from the tyranny of long budget cycles.

To tackle the stigma of failure, some of the companies I’ve talked with treat innovation as a form of research. Small startups might be surprised at how much primary research costs large businesses. A global study, conducted by a large research company, requires many months and hundreds of thousands of dollars to complete.

Rather than saying, “we’re going to create a new division to sell widgets,” some Intrapreneurs say, “we’re going to study the widget market.” Then they use the budget for the study to enter the market with a minimum viable product and learn quickly.

This has two key consequences:

Startups often talk about product/market fit, the moment when you’ve found the right product for the right market and things just snap into place. I’ve found there are three big dimensions, and the third one—method—is often overlooked.[iii]

Innovation on method is one of the reasons we’re in a renaissance of entrepreneurship: we have a fundamentally new channel through which we can source and deliver products. We’ve moved from physical channels with high coefficients of friction to online models made up of bits, mobile devices, and web sessions. Many of today’s innovations aren’t new products or even new markets—they’re new methods.

Consider Amazon as a book publisher:

There have only been a few other truly fundamental changes in written history, such as the replacement of muscle power with steam power, and the resulting industrial age; or the replacement of word-of-mouth with mass printing and literacy. Both of these changes offered an entirely new method of doing things, and triggered a flurry of innovation. 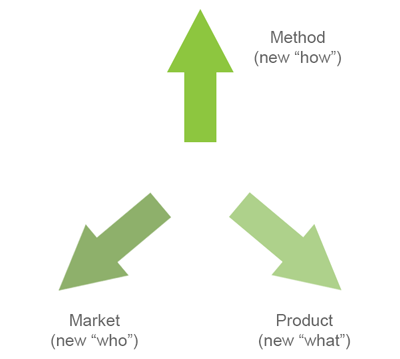 Intrapreneurs in big companies know this, and spend much of their time on method innovation—sometimes called go-to-market strategy, but with a far more speculative and experimental angle.

Big companies don’t work on one thing at a time. They have a portfolio of innovation projects, and they manage them much as an investor might manage investment, balancing risk and novelty with predictability and familiarity. The best companies put innovation into three distinct portfolios: sustaining, adjacent, and disruptive.

We can summarize the difference between these three groups by their core focus and how well we understand the problem and solution:

I’ll be spending the coming year digging deeper into this subject at www.tiltthewindmill.com, giving people who sign up for the mailing list access to many of the interviews and case studies. I’m not sure whether it will result in a book, a podcast, videos, or simply a better understanding of the issues—but in Lean style, I’m hoping to find out.

[i] (I should point out that many of the ideas here aren’t new. Long before startups raised the banner of product/market fit, H. Igor Ansoff’s two-dimensional matrix described innovation along those two dimensions. The Three Horizons model of innovation comes from McKinsey and Geoffrey Moore’s writings. And the tension between sustaining and disruptive innovation is at the root of Clayton Christensen’s Innovator’s Dilemma.)

[ii] For a more modern example of listening to the wrong customers, consider the cloud computing industry. When large server vendors asked their best customers what they wanted, they were told, “more of the same, bigger and cheaper and faster.” At that time, cloud computing offerings from Amazon Web Services failed these tests in every respect: they were less powerful, more expensive, and less reliable than physical servers.

But Amazon wasn’t targeting CIOs and enterprise IT. Instead, it was talking to startups, application developers, and CTOs—who wanted involved pay-as-you-go pricing, high aggregate capacity, and quick launching of new servers. This is a classic example of the Innovator’s Dilemma; studying a market by entering it, cheaply, is a far more effective way to discover new criteria than surveying your existing customers.

Later, of course, cloud technology matured so that it’s possible to build faster machines (by sharing the load among many of them), save money (by varying capacity with demand), and create more reliable applications (by failing gracefully across data centers worldwide.) So in the long run, cloud computing met all of the CIO’s needs—which is why incumbent server vendors are scrambling to launch cloud offerings.

[iii] Marketing purists will point out that the broadest possible definition of product includes the entirety of brand, channel, delivery, pricing, and surrounding services, so there’s no need for the “method” dimension. While this is true, it’s a point often lost on organizations of all sizes, particularly those for whom sales is a separate function from product management or research and development.

Tilting the windmill by Alistair Croll